Our public facing civic dialogue, currently politicized beyond recognition, is seldom defined through reasoned discussion and considered action. The goal of the Imagination One series is to help uncover qualitative and or quantitative solutions for each unique concern.

Imagination One, organized by Scott Brandon and Martine Dubin, is designed to focus attention on how we perceive and receive information, how we negotiate social concerns, and how we collectively attend to the many issues facing humankind today. But above all, the dialogue aims to emphasize the need for continuous conversation regarding the vital roles in which imaginative thinking and creative action play for society. Imagination is a powerful force, making the world curious, outgoing and innovative.

Today, most leaders across sectors recognize that innovation is the only competitive advantage that can’t be outsourced. We see that the best schools and companies are those with deep cultures of creative problem-solving and problem articulation. But both innovation and creativity depend on imagination first: the ability and willingness to conceive of what is not, and to visualize new possibilities. Especially in economic and social times like today, imagination matters more than ever.

Imaginative thinking is foundational; is teachable; and is learnable. Every one of us is born with imagination and those who develop it, thrive. It flows through every discipline and profession, and its cultivation often spells the difference between potential fulfilled or wasted. A strong economy and an empathetic society depend on imagination.

The Center on Education Policy, Conference Board, Partnership for 21st Century Skills, National Governors Association, National Center on Education and the Economy, and the IBM study of 1500 global business leaders all cite imagination and creativity as fundamental skills for individuals and for countries in competing in the global economy. Opinion surveys show that the public is increasingly aware of the central role of imagination in assuring a high quality of life.

Imagination is a skill that can be nurtured in our workplaces and communities and taught in our schools. We need an increased awareness for imagination as a key cognitive capacity. We need to bring to light the role in which imagination plays, engaging policy makers, business leaders and thinkers across a multitude of professions. By initiating the discussion, we can build an action plan for making the cultivation of imaginative thinking an integral component to educational systems and professional training.

Alongside this 3-day conference were 60 conversations in 42 states around the USA. These events reached more than 8 million people via social media, live stream and direct involvement, leading to numerous changes in policies, practices and even laws across commerce, culture and education.

Simultaneously, Brandon and Dubin launched the series, Imagination Conversations on Newswirefm, the digital TV network now known as CORE, both of which were founded and created by Martine Dubin. Today, the series reaches 10 years of distribution and has received millions of viewers worldwide.

Scott Brandon devoted the past 35 years to building and researching complex organizational systems, including 25-year tenure as an executive director at Lincoln Center and now as director of Litróf Consulting LLC and President TRaDE Inc. Using his Imagination-Creativity-Innovation (ICI) Index, he delivers a bottom line and outcome-based practice designed to foster inclusion, diversity and equity while improving organizational systems via commerce (transaction), culture (interaction) and education (sustainability).

His latest interest has been within healthcare, consulting with medical clinicians and researchers focused on precision medicine and its related practices. While speaking at a wide range of medical conferences Scott coined the phrase “precision education” to describe the type of diversity metrics and big data needed to create educational activities for healthcare practitioners, policy makers and the general public.

At Lincoln Center, he created the Imagination Conversation (IC), a series of 60 civic dialogues to show how imagination-based outcomes impact change variables and increased the organizational budget/endowment by over 350%. Currently Scott is cresting another IC series, this time global, focusing on outcome-based measures around important social, economic and educational issues.

He co-authored “Imagination First” (EBSCO 1% business books, endorsements including Dan Pink, Mihaly Csikszentmihalyi and Judith Jamison) and has been contributing author or shared stage with mentors and luminaries such as Maxine Greene, Ken Robinson, Deepak Chopra, Ervin Laszlo, Tillie Olsen, Adrienne Rich and the Dalai Lama. Scott graduated Ohio State University with a Master's in education/cognition/symbol systems and completed course work for PhD. Previously he was modern dancer, beekeeper, spelunker and Air Force medic. Scott is researcher of systems theory, how interaction and transaction co-exist across platforms and is preparing another book on this topic, tentatively titled Imagination and the Modern Marketplace.

How can imagination be fostered, enhanced and measured? What environmental conditions or habitat is most conducive for the evolution of human imaginative potential?

The Imagination Index has been designed to answer this ‘big question’ and provide benchmark assessments through large-scale data analysis to refine and field test an assessment of individual and community-based practices. These practices measure imagination capacity over time, identify growth areas, accelerate learning cycles, and engage individuals and communities in steps toward enhancing (her/his, its) own imagination.

It is designed to enhance and measure an individual’s and organization’s imaginative capital, creative output and product innovation through auditing, filtering and accelerating imaginative "data" within business, education and nonprofit systems and professional networks. This conceptual framework starts with the goal of recognizing that the innovative outcomes for public which inspire social and economic good are a necessary condition of change. 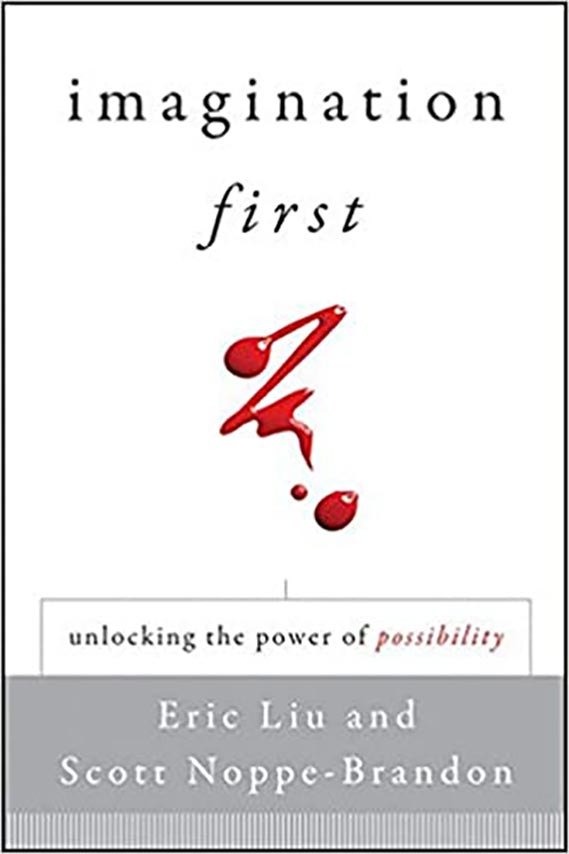 When imagination becomes habit, it can transform your work and your life

The best corporations know that innovative thinking is the only competitive advantage that cannot be outsourced. The best schools are those that create cultures of imagination. Now in paperback, Imagination First introduces a wide-variety of individuals who make a habit of imaginative thinking and creative action, offering a set of universal practices that anyone can use to transform their life at work, home, and play. These 28.5 practices will enable anyone to become more imaginative and to teach others to do so as well?from corporate executive to educator to platoon sergeant.